After initial success in the early 80’s, iconoclastic metal band RIOT rose from the ashes after a few years of silence to release THUNDERSTEEL (CBS 1988), an album that would become as celebrated as the new line-up that spawned it: Mark Reale (guitars), Tony Moore (vocals), Don Van Stavern (bass), Bobby Jarzombek (drums), and Mike Flyntz (guitars) who joined the group during RIOT's first triumphant THUNDERSTEEL Tour of Japan.

Their follow-up release, THE PRIVILEGE OF POWER (CBS 1990), flexed RIOT’s creative and metal muscles even further, cementing renewed fan interest around the world, particularly in Europe and Japan. In the ensuing years, the THUNDERSTEEL line-up became near-legendary in the metal canon. They were hailed as “the bridge between Priest and speed metal” and have been heralded as an influence by many, including Hammerfall who cover RIOT’s “Flight Of The Warrior” off THUNDERSTEEL on their new CD, 'Masterpieces.'

With Reale, Moore, Van Stavern, Jarzombek, and Flyntz joining forces once again for the first in some 20 years. The world is set to experience the power of the THUNDERSTEEL constellation once again! The new release "Immortal Soul" picks up where Thundersteel and Privilege of Power left off without missing a beat. RIOT are back! Performing at festivals and touring this metal juggernaut, Johnny and gang are back for the attack! Sadly founding guitarist Mark Reale passed away in 2012 of complications from Crohn disease, but the band at his wishes will continue to create and produce music in his honor and proudly fly the RIOT colors once again! A new CD is in the works and it is in the vein of the Thundersteel sound and features a dedication to Reale as well as songs he wrote with bassist Don Van Stavern before his untimely passing and will features another song in the "Johnny" Trilogy! It is scheduled for a 2014 release via the Steamhammer/SPV and Marquee/ Avalon labels. Shine On!

RIOT would like to thank all of our fans for their undying patience, love and support as we go through a difficult transitional period for the band.

As all of you know, we lost our inspirational leader, founder and brother Mark Reale last year after a long battle with Crohn’s disease. In Mark’s honor and with the blessing of his father, Tony Reale, we have decided to continue to carry the torch for our fallen comrade.

There has been a lot of speculation and opinions concerning what the band should do next. We understand the apprehensions held by many, but out of respect for Mark and our legion of fans we have decided to continue to bring you the RIOT music you’ve come to know, love and appreciate throughout the years. We promise to continue on in this same great tradition. We couldn’t move forward without your support.

We also would like to thank the many singers who tried-out to be a vocalist with RIOT as we worked to replace the great Tony Moore, who has decided to step away from the music business. He has settled down with his wife, Ann and a great job. We thank Tony for joining us on a reunion record and a few dates for our fans and we wish him and his wife nothing but the best; Never Surrender Tony!

Thank you vocalist extraordinaires Tony Harnell, Bryan Harrington, Sean Peck, Daniel Heiman, Joey Belladonna, Chandler Mogel and a host of others for believing, singing and chatting with us and helping us out.

We would like to introduce an amazing vocalist and human being who will help us rebuild this metal juggernaut and step in and fill some big shoes while sharing the same vision as the rest of us. He has the experience to take over the
reigns and front one of metal’s pioneering bands with an amazing vocal range and stage presence. He is a great songwriter to boot! Please put your hands together and welcome to the stage … Todd Michael Hall.

You might know Todd from Jack Starr’s Burning Starr and Reverence. If you do know him you know this guy can sing! We went through many talented vocal submissions, but in the end, metal aficionado and guru Bart Gabriel, who happens to work with the great Burning Starr knew what we were looking for and bestowed upon us this great gift in a vocalist.

With a few European RIOT V (Mark Reale Tribute) dates being booked for early 2014 and a new album in the works for a summer 2014 release, RIOT V is inspired as never before and still at the top of its game. The new CD promises to be a true successor to the legacy of “Thundersteel,” “Privilege of Power” and “Immortal Soul.”

Mark Reale and the RIOT legacy will forever shine on and as long as the people demand it we will keep coming back with great music for years to come.

Thank you and lots of love for your faith and undying support throughout the years and for your future support. Please welcome Todd Michael Hall to RIOT V.
PeterGriffin

"Hey Rioteers! Just an update! Recording is going great and the songs are sounding awesome. Todd Michael is killing it on vocals and the band sounds amazing! Josh Block(Andy Sneap) is doing an amazing engineering job as well. The original artwork by artist Mariusz Gandzel for the album/ CD cover is looking awesome as well. Think "Thunder Seal"!!! Yes he's back! We will unveil the artwork soon."
PeterGriffin 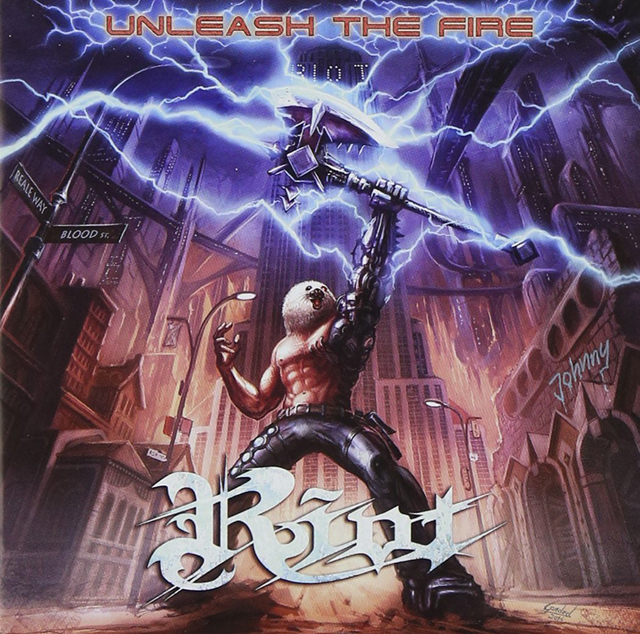