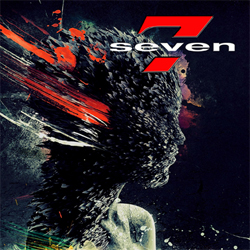 The AOR scene in the late eighties was a thriving hive of activity. At the turn of the new decade, the likes of Mitch Malloy, Paul Laine, Firehouse, Tyketto and Talisman were all signed up and ready to make an impact on the genre. Everybody wanted an AOR band, and Polydor records were no exception. Having been fairly successful in the U.K with the likes of Magnum and Little Angels, the label had set their sights on 7 Seven, a relatively unknown act from Bournemouth.

The roots of the band originally began in South Africa in an outfit called Face To Face. Both Keith McFarlane and Simon LeFevre (and his brother John) had enjoyed considerable success over an eighteen month period, releasing several singles and one album, before dissent in the ranks saw the young band split up. Meanwhile, a young Mick Devine was plying his trade as a drummer in the band UC27. With both McFarlane and the LeFevre brothers returning to the UK, it was decided after several months to put the band back together, but base it in the UK, as Mick Devine explains, “I took a brave leap leaving South Africa, as I hadn’t met Simon, John or Keith previously. We were originally based in Woking, but after meeting Mike Parker (our initial Manager – now deceased) at a talent show, we moved to Bournemouth. I was initially approached by John to drum with the band, but they thought I was a much better singer than drummer and realised I needed to come out from behind the drums and become the lead singer.”

A quick name change ensued and Seven was born. When John Wolff (The Who, John Parr) joined Parker to co-manage the band, they soon secured a support slot on the first nationwide tour of Brother Beyond. It was from here, via Phil Schofield and a record exec’s wife, that things took a turn for the better as Devine recalls, “Having picked up valuable live experience (and a sizeable fan base) on the Brother Beyond tour, we attracted Phillip Schofield’s attention who started to play our demo’s on radio one. Whilst on tour, the head of Polydor’s wife and kids came to one of the shows and the story goes that she went home and told her husband that he needed to sign us,” laughs Devine. “That combined with the touring, fans and Phil’s plugging, a deal was offered and as a bit of media hype, Philip Schofield was on hand to witness the record deal signing.”

Heading out on the road, they supported an eclectic variety of acts that included the likes of Jason Donovan, Richard Marx, The Monkees and a second stint with Brother Beyond. It’s a time period that Devine is keen to reminisce about, “Even though they were out and out pop gigs, we loved the crowds and the noise. We went from pubs to opening to 3000 screaming fans in Southampton. It is a very addictive adrenaline rush. We got to play all the top venues, which were fantastic; including Wembley Arena, the NEC, BIC, SEC and even the Royal Albert Hall. The Richard Marx tour was definitely the best for us with a more grown up audience we were able to rock it up and truly be ourselves. It went down really well!”

Entering the recording studios, with John Parr at the production helm, they recorded two very strong singles in the shape of “Inside Love” and “Man with A Vision. One of the myths about Seven is that they recorded a full album, but that it was shelved by Polydor after the band were dropped. It’s a myth that Devine is quick to dismiss, “We never had an album deal. We were signed for two single releases and we were then dropped. We had more than an albums worth of material, mostly consisting of really good quality demos, having recorded at some great studios including a number of weeks at Rockfield.”

Fast forward to the present day and bass player, Pat Davey, was working alongside Robert Hart on an Escape Music album when the na
me Seven cropped up in the conversation. It would seem that Khalil Turk was a big fan, as Devine explains, “Yeah, back in the day Khalil had really loved the band and he got in touch to see if we would be interested in finally releasing an album with the original line-up,” gushes the excited singer. “As we are currently living in different countries (Keith & Simon are in South Africa, Myself, Pat & Oz in the UK), Khalil put us together with Lars Chris (fantastic Swedish Hard rock guitarist and producer) who is producing the tracks from Sweden and then sending tracks to SA & the UK for each of us to add our individual parts.  The sound is definitely fresher and harder and more up to date, giving the band, the edge it needed back in the 80’s.”

This brings us up to the present day and we are all now waiting with excitement for the Seven album to finally be released. One thing for sure, it has been worth the wait.